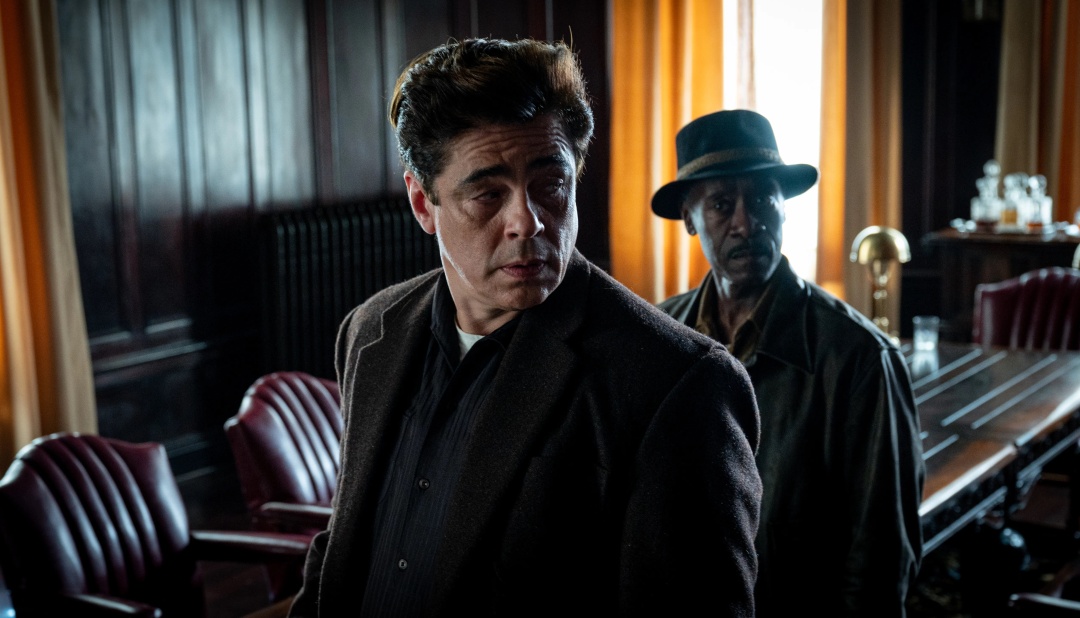 ‘No Sudden Move’ Review: A Great American Noir from the Greatest American Storyteller of the Generation

Steven Soderbergh’s “No Sudden Move,” the director’s second feature shot during the pandemic after “Let Them All Talk” (both distributed by HBO Max), is one of the great American films in recent years, proving that Soderbergh is no doubt one of the greatest American modern filmmakers. This crime-noir begins with a small crime that goes wrong, gets bigger and bigger, then eventually reveals the power structure with its profound social commentary. Like many other great films Soderbergh had made throughout his impressive career such as “Out of Sight,” “Traffic” and “High Flying Bird.”

Set in Detroit in the 1950s when the automobile industry was thriving, “No Sudden Move” is not only about the city but also about the nation that starts to polarize radically in which the corruption comes from the top and the divide between the haves and have-nots increases. We start with Curt (Don Cheadle), who has just been released from prison and needs some cash to get out of town before a powerful criminal mastermind (the great Bill Duke) comes after him, is recruited by a mysterious middleman Mr. Jones (Brendan Fraser) for a “babysitting job” that will pay him very well. He first meets the partner named Ronald (Benicio Del Toro), who is having an affair with a mob boss’ (Ray Liotta) young and beautiful wife (“Uncut Gems” breakout Julia Fox).

Next, the two meet the third team member Charley (the very wild Kieran Culkin), who is in charge of the mission. They break into auto executive Matt’s (David Harbour) house and takes his wife (Amy Seimetz) and kids (Noah Jupe and Lucy Holt) hostage. While Curt and Ronald are “babysitting” the family, Charley escorts Matt to his office and steals a secret document from the safe. But, you’ve already guessed it, everything starts to fall off: there’s betrayal and someone is killed, then policeman (lead by Jon Hamm) involve, forecasting more brutal bloodshed is on the edge of happening.

The brilliant part of Ed Solomon’s (“Men in Black,” “Now You See Me,” and Soderbergh’s groundbreaking HBO series “Mosaic”) script is that the audiences and characters figure out what happen almost at the same time in the most satisfying way you can ever imagine. Your head will spin all along as Curt and Ronald try to connect all the dots, then gradually realize the higher powers behind the curtain are always controlling their lives as well as the entire system. This is where the two mob bosses played by Liotta and Duke respectively come in the world of “No Sudden Move,” and later with an auto top person played by a Soderbergh regular star (it’s a surprise cameo but feel free to guess).

Soderbergh has always been one of the most economic filmmakers in history. You won’t able to see any single unnecessary shot or cut in his best works, making his films intense and rich. And as always, under his pseudonym Peter Andrews as cinematographer and Mary Ann Bernard as editor, Soderbergh gives the film a unique visual style. Every cut is right on the beats, and frequently shooting with fisheye lenses and Dutch angles enlarge the frame, as well as the world, the characters live in, immersing the audiences into characters’ emotion and confusion.

The 1950s Detroit is everything about the presents. The cultural insight becomes an urgent interrogation, perhaps humanity doesn’t come as far as we all think it has. With his sharp, essential social commentary, Soderbergh’s return to crime drama is pure joy, a thrilling ride, and a chilling experience. It’s exciting to see an excellent storyteller who is one of the best in his generation revisits his promising land and renews his vision.

One thought on “‘No Sudden Move’ Review: A Great American Noir from the Greatest American Storyteller of the Generation”