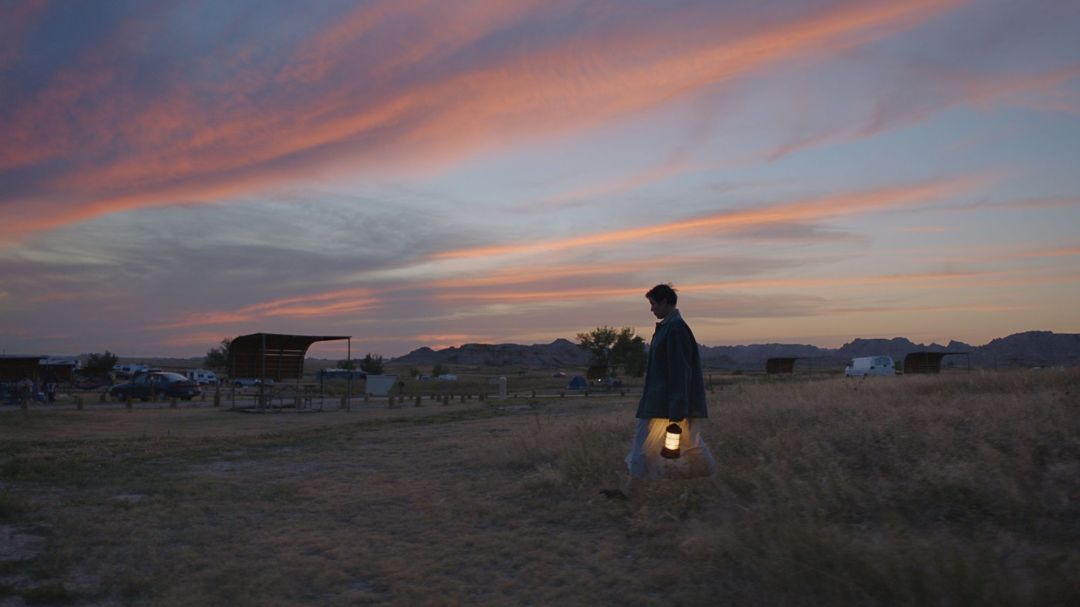 Near the ending of writer/director Chloé Zhao’s masterful third feature “Nomadland,” a veteran traveler says: “One of the things I love most about this life is that there’s no final goodbye. I’ve met hundreds of people out there and I don’t ever say a final goodbye. Let’s just say, ‘I’ll see you down the road.’ And I do. I see them again.”

Being one of the most prestigious frontrunners in this awards season and will absolutely take home Oscars for multiple categories, “Nomadland,” like Zhao’s previous masterpiece “The Rider,” celebrates the identity and richness of the American West in the most poetic way you can ever imagine. In the film, those travelers (or, nomads) don’t live in a house, yet they feel at home and never lose themselves.

The film is based on Jessica Bruder’s 2017 non-fiction book “Nomadland: Surviving America in the Twenty-First Century,” but Zhao creates a fictional character, Fern, as the lead and guides us into this unconventional world through her eyes. Fern, played by Frances McDormand (also co-produced the film), used to be a teacher in a corporate town Empire, Nevada. The town is a very real place just as the opening title notes: it was built for the United States Gypsum Corp., which Fern’s husband once worked for. Then, the plant shut down and the town became a ghost town. Finally, in 2011, the town’s ZIP Code was discontinued.

Now somewhere in her 60s, Fern’s husband passed away, and she has no children. So, she buys a van, hits the road, joins other nomads, and picks up seasonal works during her travel such as Amazon CamperForce Program over the winter holidays. Most of the nomads we see in “Nomadland” are real-life persons (some of them also feature in Bruder’s book), who play the altered-fictional version of themselves, sharing their experiences, traumas, and shattered dreams. Same as Zhao’s former two films “Songs My Brothers Taught Me” and “The Rider,” “Nomadland” put non-professional actors in front of the camera such as Bob Wells, Linda May, and Charlene Swankie. Most of them are suffered from the American economy and decide to leave the system to find, at least, somewhere to go.

These nomads reject the idea of the middle class and live in their own version of the American dream. They free themselves from the system and enjoy independence, aiming to see more and feel more. Yet, they, like all human beings, still need connections, so they have their own communities. Although the film doesn’t romanticize the life of hitting the road, Zhao beautifully delivers a quiet joy from these nomads’ lives when they sharing tips of surviving on the road, supporting each other without asking for returns, and telling their stories of dreams and griefs. From here, you will share the same freedom, frustrations, and joyousness with these nomads.

McDormand might be the first famous professional actor Zhao ever casts in her film. However, even McDormand is one of the most legendary actresses on screen, she blends in with these real-life nomads gracefully. In fact, during the four-month production across America, Zhao, McDormand, and the crew lived in their vans, filming in the real locations from the Badlands to the Pacific shores to the endless horizons in the magic hour. These pretty places are shot by Zhao’s long-term collaborated cinematographer Joshua James Richards, who captures the vast and isolation of gorgeous America’s landscapes. And the sensitive score from Ludovico Einaudi just adds the poetry breathtakingly.

And of course, the magic can only happen because of McDormand’s generous performance in every single scene. Through her expression, not only this complex woman but also the world of “Nomadland” come alive. Fern is stubborn yet warm deeply. She makes friends and offers helps to everyone she met. Essentially, it’s a story of a woman opening a new chapter with grief after everything she knew is vanished. From her slight smiles and glances, McDormand delivers Fern’s whole life in each tiniest gesture. Already had won two Oscars Best Leading Actress for “Fargo” and “Three Billboards Outside Ebbing, Missouri,” McDormand is definitely one of the top actresses throughout generations, and this is one of the best performances in her career. Giving her another Oscars for “Nomadland” will even be considered underrated.

It is just strange that Zhao, a Chinese-born-and-raised filmmaker, always captures the very natural spirit and roots of modern America West with joy and tears like Terrence Malick and Kelly Reichardt excel in. Making “Nomadland” her third feature, Zhao’s lyrical style and her evolvement can clearly be seen. It’s marvelous, and I cannot imagine how she will amaze us with her next project: Marvel Studios’ “Eternals.”

Despite depicting the life of these very ordinary Americans set in 2011 (there’s also a billboard of the first “The Avengers” movie), the film somehow conveys the anxious feeling of not knowing the future we all have nowadays. Yet, the film is also the redemption and solution for the uncertain 2020s – a smile of a stranger, the simplest kindness from a person you meet on the road, streams in the forest, and mountains you see during the long drive. Home is wherever we are, and home is where we never feel alone. This is the world we should fight for, where people help the people instead of standing against each other. Houseless but not homeless. We will see each other down the road.

One thought on “‘Nomadland’ Review: Chloé Zhao’s Powerful Third Feature Is A Moving and Sober Look Into America’s Identity”